This is a feature that is released with version 8.1.0

In the Backups dashboard you can get an overview of your node backup management. It will give you an overview of all nodes that are being polled for backups. 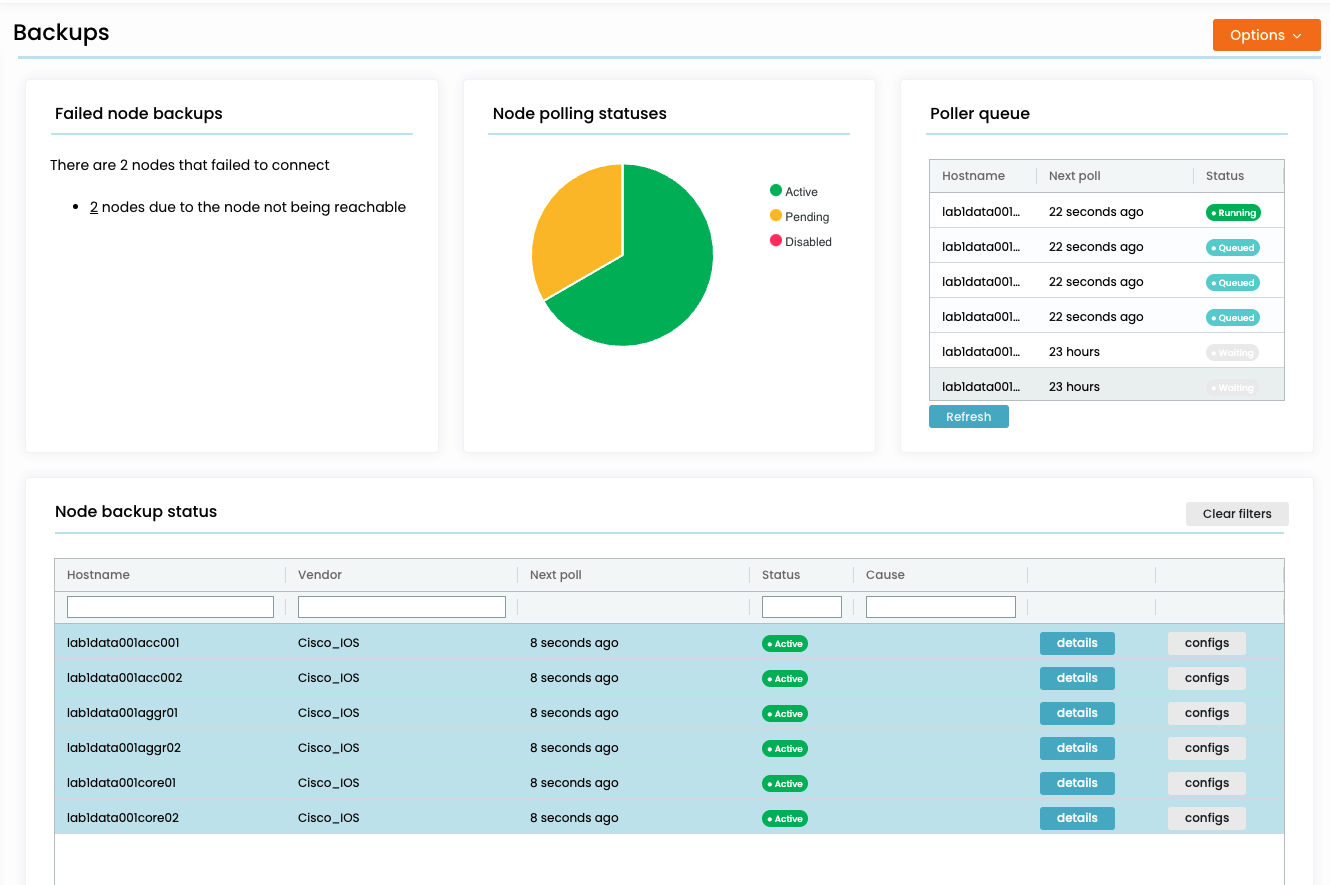 How to get it to work

When you first start NetYCE, This screen will be empty. You have to set up your nodes to be polled. The steps you need to perform are:

As soon as you have a polling group that contains the nodes you want to track for backups, they will be picked up automatically. You need to wait a bit for the nodes to be put in the queue and be polled, but this should not take more than five minutes.

The node backup status grid gives you an overview of all the nodes that are being polled for backups. It shows the nodes' hostnames and vendor types. Next poll shows the next time the node will be polled for a backup. If this backup shows any differences, it will be saved to the database and any compliance policies will be re-checked.

Nodes can have three statuses:

If the most recent poll has failed, the Cause column contains the reason why. The details view will show you more information on the node. Configs opens the config diffs view, where you can see the entire history of the backups of the node.

The “Backup Now” button will set the Next poll time of a node to now. This means that it will be picked up by the poller's next cycle. You can confirm this by looking at the poller queue. If the node in question is disabled, its status will be set back to active.

Nodes can fail to store a backup for a variety of reasons. The node can be down, it can be not reachable, your passwords can be wrong. This section groups the failed nodes together and by clicking on the causes, it will filter the Node backup status grid with those nodes, to give you an overview of how to solve it.

The chart here gives an overview of the statuses of all the nodes that are being polled for backups. Clicking on them will filter the Node backup status grid.

Nodes will not be polled for a backup immediately. Instead, they are put into a queue, and the poller will take the one with the most recent Next poll time, and go through the nodes in that order. In the Poller queue grid you will see an overview of this queue, and the nodes that are currently being polled. There are three statuses:

There are a number of options:

The config search section allows you to search for strings through the backups that have been accumulated. It will search through either:

The default is Filtered nodes, until you select some nodes, which triggers a change to Selected nodes.

The search string will match any line in any matching config that contains it. Lines do not have to fully match, therefore wildcards are not supported. You can enter multiple lines, that means that only matches that check out on both consecutive lines will be returned. If you want a line to match anything, you can use the '.' notation, this helps to show more context around a line. For example the search string:

By default the Config search will search through the most recent config that it can find. If you want to change that, uncheck the “Last config only”-checkbox and specify the number of days in the past you want to look back for.

Please note that this tool will search through entire node configurations. So if you search through large volumes of nodes, this feature will take a while to produce its results; this can take up minutes.

When double-clicking on a node in the node backup status grid, it will take you to its details view. 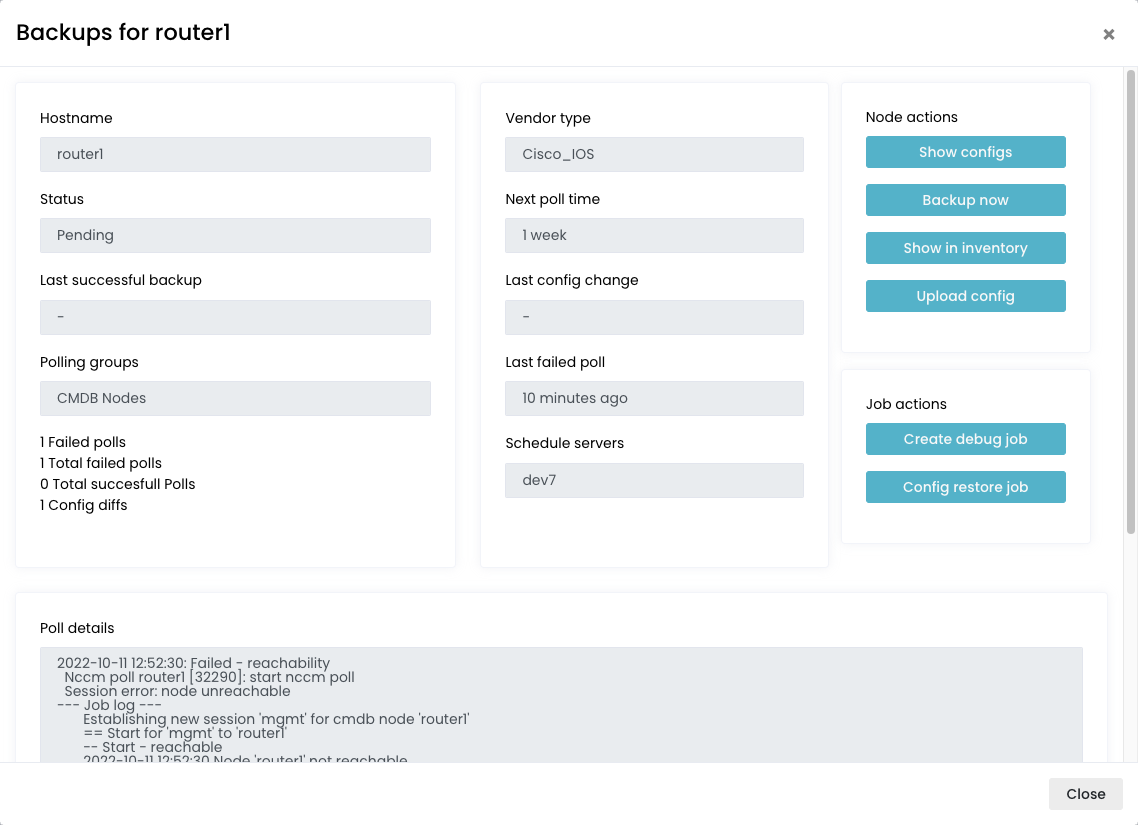 Nodes can have three statuses:

Next poll shows the next time the node will be polled for a backup. If this backup shows any differences, it will be saved to the database and any compliance policies will be re-checked.

Poll failure details is shown in case the most recent poll for this node fails. This contains a log that can give you a bit of a clue as to what is going wrong.

The Show configs button brings you to the config diffs form.

The Backup now button sets the Next poll time for the node to now. This means that it will be polled for a backup on the next poller cycle, and if it had the status of disabled, it will now be active again.

The Show in inventory button will bring you to the inventory page. Either YCE or CMDB.

The Upload config button will allow you to manually submit a config to store in the backup database. 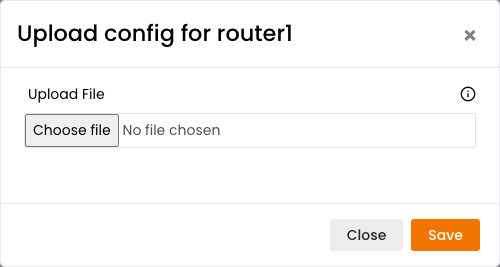 These buttons will schedule a job for this node. This job can then be followed for debugging purposes in the Job logs

The Create debug job button will schedule a job that polls the node's config and checks it for differences. This is the same thing that the backups poller does for each node, but this is a job that can be followed in the job logs in details. We don't normally show these jobs in the job logs, because most backup jobs won't have an issue, and otherwise the job logs will get flooded. However, this button allows you to check in detail why a node's backup is going wrong.

The Config restore job button will schedule a job that restores the node's config. This will either be the config that has been marked in the config diffs form, or the latest if no marked config can be found.